The Mystery of the Rebellious Robot 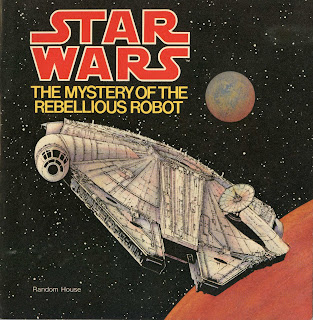 In 1979, Random House put out three storybooks aimed at younger readers. Here we have 'The Mystery of the Rebellious Robot' and it's a hoot. I absolutely adore the illustrations. They have a great 70's borderline-surreal charm to them and I've never seen anything like them in relation to Star Wars before. 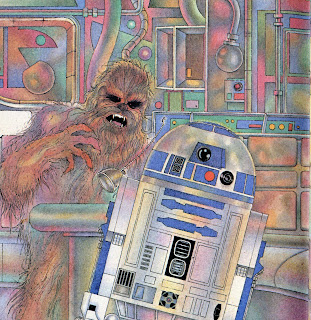 That's one scary looking Chewbacca! He's an absolute monster in this book and I wouldn't be surprised if he gave a few kids reading this nightmares. Anyway, the story revolves around Han, Chewie and R2 aboard the Falcon, heading to Tatooine with some supplies for Luke who is leading a team of scientists to build 'super-vaporators' to combat the drought there. Chewie gives R2 some oil and the little droid promptly goes berserk and takes control of the Falcon. 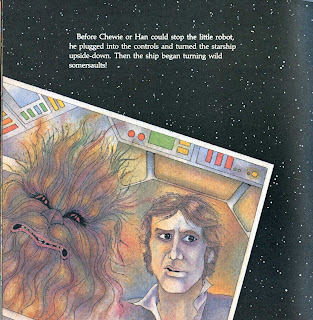 Ha ha! Another great image of Chewie. He's certainly having a hair-raising experience here! Han sends a distress signal to Luke down on Tatooine and soon the Jedi-in-training sets off in his X-Wing (called simply a 'plane' here) to help. 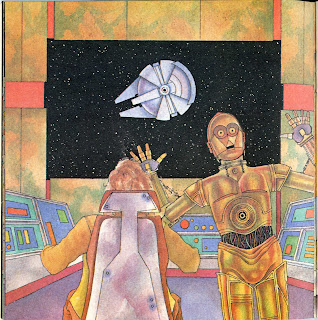 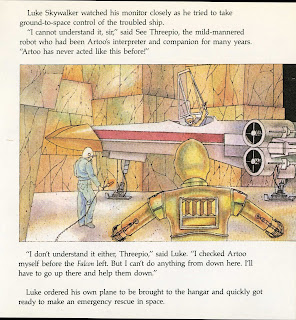 Luke guides the Falcon down to the planet and reveals to Han that computers and machines have been breaking down all over the planet. Stuff's been going missing too and it looks like somebody is trying to sabotage the project. Whilst discussing this in the conference room, there is a tremendous explosion. Luckily nobody is injured but 3-PO is taken off to maintenance for some repairs. After an oil bath, 3-PO's systems shut down. A handy R5-unit discovers that contaminated oil it the problem. 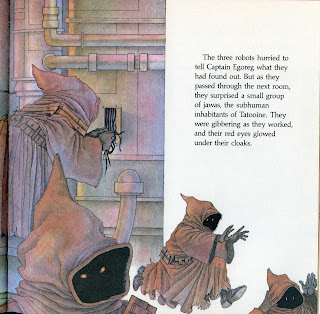 It is discovered that the Jawas are at the bottom of all the trouble. They've been contaminating the oil in order to get their hands on droids and machinery. Chewie chases them around for a bit and catches them all up in one swoop. 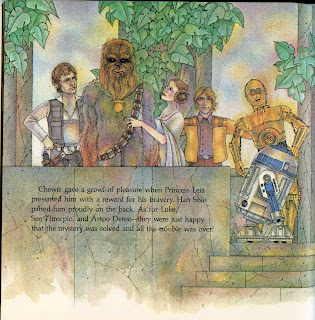 Chewie finally gets his medal!
at 9:43 PM

I have this book somewhere--and you're dead on about it's charm. I love the iridescent look of the Falcon's interior!!

Just found your blog and it's awesome!

Can someone help me out here?

I have two "Rebellious Robot" booklets. One has a white barcode box on its back bottom-left (picture 3), the other doesn't (pictures 2). This peaked my curiosity.

Both have an identical inside publishing statement that states that they were copyrighted in 1979. But the printed statement in the non-barcode one is not nearly as sharp as the other one. The non-barcoded one's printing alignment is different - every page shows a couple of more milimeters at the bottom than the other one does. This has caused the cover of this booklet to show about 1 mm of the bottom edge of its interior pages.

I suspect that this un-barcoded booklet is a bootleg-knock-off. I saw a lot of this counterfeit merchandise in Taiwan when I visited there in 1976. Barcoded products were not widely produced in the U.S. until about 1980.

How about some feed-back?

Hmm, odd. My book (the one featured in this blog post) doesn't have a barcode either and shows a price of $1.25. But it dosen't have any extra mm's at the bottom of the pages.

I've never heard of bootlegged Star Wars books - action figures sure - but not books, so I can't really help you there. Hopefully somebody with more knowledge about the publishing world in general can clear this up...

Hey guys. Just wondering what the value of that book is. Theres one for sale near me and I want to make sure I dont pay too much. Its priced at $12. Is that a lot? Thanks.