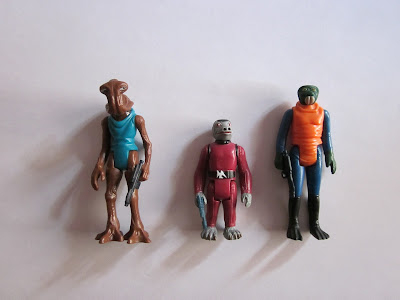 Yes, I know Greedo is missing from this collection of scum and villainy Kenner put out in 1979, but I'll get to him in another post. While far from spot on with their depictions of the background characters (Kenner was often working from one or two production shots of costumes), this is a fun and colorful trio of weirdos perfect for blaster fodder for your Luke and Han figures. 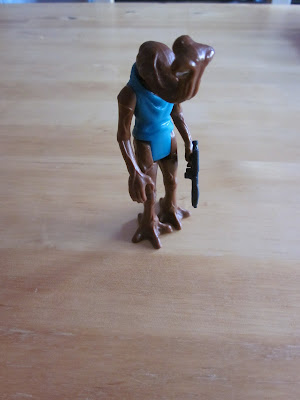 Hammerhead. You've gotta love how Kenner made up names for nameless characters based simply on their physical traits regardless of the fact that there was probably a whole species wandering the galaxy.
This guy is so bizarre, I love it. From his tree-like feet to his humpback and shifty eyes, he is a figurehead for the Star Wars weirdness that captured people's imaginations back in the late 70s. Despite the fact that all he does in the movie is sit around enjoying a drink, Kenner gave him a Stormtrooper rifle in an effort to make him more of an 'action figure'. 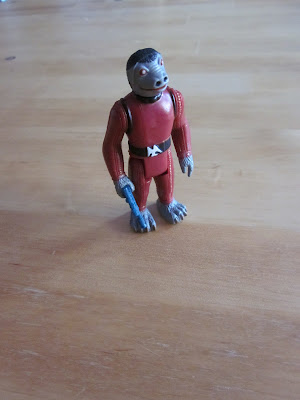 Snaggletooth here has an odd history. The figure was already released previously as part of a Sears exclusive cantina playset. Only that version was tall, dressed in blue and had funky silver moon boots. As I stated earlier, Kenner was working from a handful of production photos and only ever saw 'Snaggletooth' from the waist
up. His size and footwear (not sure if it was any more accurate the second time around) were corrected when the figure was released as part of the second wave of figures. Of course the rarity of the early 'blue Snaggletooth' figure makes it a hot collectors item. And no, I don't have one... 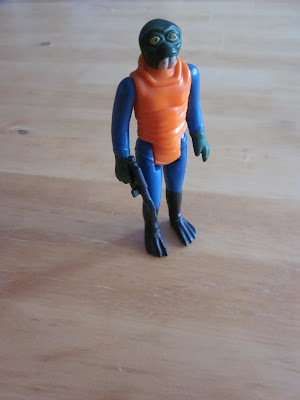 This amphibious-looking fella was named 'Walrus Man' (another all night brainstorming meeting at Kenner, I'm sure). This is the poor sap that loses an arm by Kenobi's blade in the movie. Not much to say about him except that it is very hard to find him without any paint loss on his bulbous 'lips' as they tend to scratch very easily.
at 3:59 PM 1 comment: