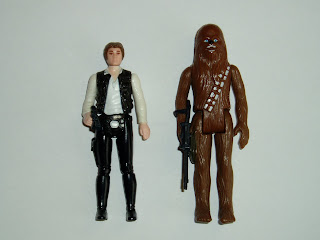 Another couple of figures from the original '78 line here. These guys must have been near the top of most kids' lists back in the day. Other than the fact that having anybody else piloting the Millenium Falcon is some kind of blasphemy, these guys are just pretty cool figures on their own merits. 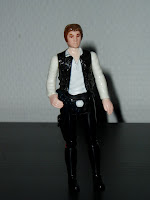 This is the original 'Small Head' Han Solo. With the release of the Empire Strikes Back line, Kenner repackaged the figure with a newly sculpted (and butt-ugly) head that was significantly larger than this one. The 'Large Head' Han stuck around for the duration of the line but kids who got into the figures in the late 70's would have had the much nicer one featured here. 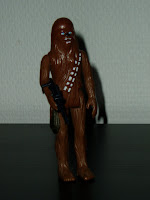 I love Kenner's Chewbacca figure. Sure, he features the same limited articulation as the Stormtrooper (i.e. rigid head and shoulders), but he's a great looking guy with nice detail on the eyes and teeth. His big-ass gun is pretty cool too, even though it's not exactly his trademark bowcaster as featured in the movie.
at 2:41 PM

My friends and I had both Han Solo figures and we referred to the small head one as "Young Han." When competition got fierce as to who would "be" Solo in our action figure epics, the kid who played second string would have to use the "Young Han" figure. Of course we often created our own characters so the figure could be virtually anyone! Only Darth Vader played "himself" without fail; he was just too distinctive looking to be anyone else!

Fun blog you have here!

Thanks for the comment! Always great to hear other people's childhood memories. Particularly when it relates to Star Wars...

Two of my faves as well. In fact they adorn one of my bookshelves as I type this. Alas, they are not the ones I owned back in the day; those are long gone. However I was able to get them cheaply on eBay, none of those inflated collector prices. Pah!

Yeah, I got rid of all mine too when I was a teenager. Sold them in a yard sale for virtually nothing. Gah! Thank God for ebay...

Nice information on some of the best figures! Check out my site at http://starwars333.blogspot.com/

Beautiful figures. They came out about ten years before I was born, but that didn't stop me from starting a collection once I discovered their glory.