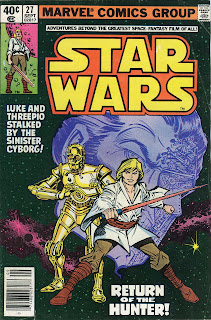 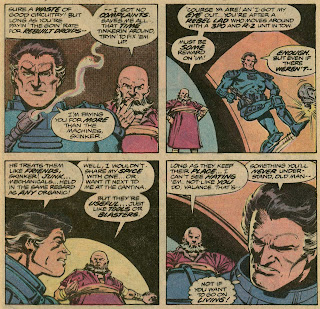 A popular villain returns in this issue, namely Valance aka The Hunter. We last saw him tracking down the Starhoppers (Han's buddies who he believed to be the rebels who destroyed the Death Star) and we know a couple of facts about him. 1 - he is part cyborg after a nasty accident. 2 - he has a deep hatred of droids and is disgusted by the idea that Luke Skywalker treats them as equals.

Since his disappearing act in the last issue that featured him, Valance has been hanging out on a world called Feriae Junction, gunning down two-bit hoodlums in seedy cantinas. One of his employers pays him in droids which Valance promptly blasts into smithereens. Part of this may be some sort of twisted therapy for his self-loathing at being a cyborg, but part of it is due to his desire to destroy the two droids that Luke treats as his friends. 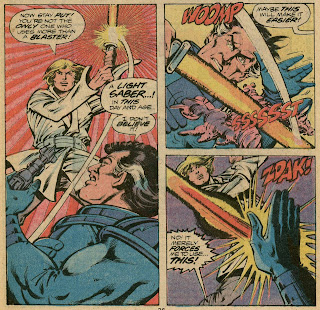 Meanwhile, Luke and 3PO are scouting out an Imperial blockade and narrowly avoid destruction by a Star Destroyer. They hop into hyperspace and make for Junction where they plan to pick up parts for repairing R2 units. Valance is alerted to their presence and makes to intercept them, but stops to quickly dispose of an imperial spy who has been keeping tabs on him.

The showdown between Luke and Valance goes down in a scrapyard and after a shot from his blaster is deflected by Luke's lightsaber, Valance takes it in the face and his cybernetics are revealed. This doesn't stop him from disarming Luke and things look bad for our intergalactic farmboy until 3PO steps between the two of them, prepared to die for his master. This totally blows Valance's mind as he cannot comprehend the reasoning a droid might have to sacrifice itself for a human. He lets Luke and 3PO go on their merry way while he presumably rethinks his life... 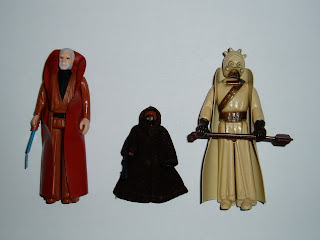 That blisteringly hot desert planet with the twin suns would lend several more characters to Kenner's action figure range when they released their second line in 1979, but amongst the original 12 there was just three (not counting Luke). Ben 'Obi-Wan' Kenobi, Jawa and Sandpeople. 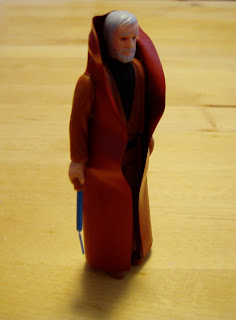 Obi-Wan Kenobi (who went under the name 'Ben' back in the early days) was one of only three figures with lightsabers from the first movie. Blue is the correct colour (unlike the inexplicable yellow of Luke's saber). He sports a brown vinyl cloak and the only major variation that I'm aware of is his hair colour which came in white and grey (shown here). 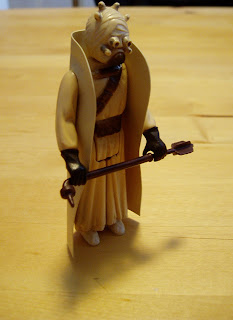 'Sandpeople' was an odd title for the Tusken Raider figure, not least because it uses the plural when only one figure was released per card. The name was changed in later lines to 'Tusken Raider'. Like Ben (and Darth and Leia), this guy came with a vinyl cloak. The one shown here is of the stiffer variation with a short 'cropped' collar. I've seen examples of the figure with the other softer cloak and higher collar too. Another variation is the 'hollow cheek tubes' one which is much rarer than the 'solid tubes' variation shown here.

The cool thing about this figure is the position he holds his 'gaffi' stick. If you raise his arms, he mimics the pose struck by one of his number in the movie before attacking Luke. It's difficult to find this guy without at least some paint loss on the various silver 'knobs' on his head and face. This one has seen better days and I may consider replacing him some day, but he'll do for now. 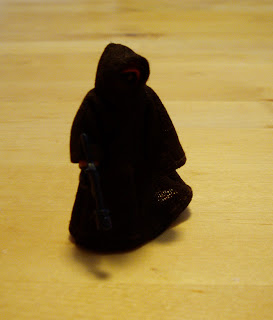 Few figures have caused such excitement among collectors as the Jawa. Notoriously hard to find even back in '78 (the Jawa was one of the last figures of the original 12 to be released), the figure then underwent a major change. The original version came with the Kenner stalwart vinyl cape. Allegedly, to make the diminutive figure give more bang for your buck, Kenner replaced this with a more expensive looking cloth cape (shown here). I don't have to tell even the most casual collector how valuable a vinyl-cape Jawa is today.

I really like this figure. Sure, he's tiny and I can imagine many kids didn't feel that he was worth the $2 price tag (Kenner really should have released 2 figures per card). But he's got some great detail for his size like the tiny yellow eyes. The cloth cape kind of obscures everything about the figure though, and you have to take it off (Jawa striptease!) to see what's underneath, as it were. Anyway, the whole deal is quite a contrast to the other figures in the line and that's probably why I find it so striking.
at 10:39 AM 1 comment: