This is the first bit of news relating to the recent Disney take-over of all things Star Wars that has got me excited. I was a bit skeptical at the prospect of the Mouse House running the show at first. The last thing Star Wars needs is more cutesy antics and goofy cartoon humor. To be honest I can live without a 'sequel trilogy'. I've always felt that Return of the Jedi brought things to a nice happy ending and never wanted to see too much of what happened next. The stand alone movies might be fun depending entirely on their subject matter. Clone Wars has officially been shut down at this point, although there has been a sneak peek at stuff already produced awaiting release. We may get a final season 6 or perhaps some feature length DTV followup. But that's not really relevant to this blog...

What is relevant is the recent announcement of an all new animated series called 'Star Wars: Rebels' which will be very much a return to the era of 'classic' Star Wars. From www.starwars.com: Star Wars Rebels takes place in a time where the Empire is securing its grip on the galaxy and hunting down the last of the Jedi Knights as a fledgling rebellion against the Empire is taking shape.  Presumably we will be back in the world of TIE Fighters, Stormtroopers, X Wings and all the other classic stuff that makes old school Star Wars fans like me giddy. Clone Wars director Dave Filioni is on board as executive producer. I don't know if that's any indication of the style of the animation we will be seeing, but I think it would be cool to see something that ties in with the existing TV series in terms of visuals. I'm also hoping for appearances from Vader and Tarkin. 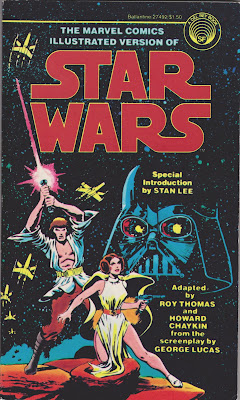 As well as releasing the first 6 issues of the comic in 2 collections (plus a single collection of issues 1-6), Marvel also did this trade-paperback style anthology published by Del Rey in November 1977. It's much smaller than the comic books so the artwork is a little squashed in there and its all in black and white as you can see in the images below. It also included an intro by Stan Lee who manfully owns that he initially turned down the idea of a Star Wars comic thinking that the world didn't really need another 'ray-gun space opera', but quickly changed his mind upon seeing an early cut of the movie. Then there's Roy Thomas's preface where he details the difficult task of producing a comic book with only movie stills to go on and the frustration at seeing scenes such as the Biggs Darklighter one being cut from the movie. 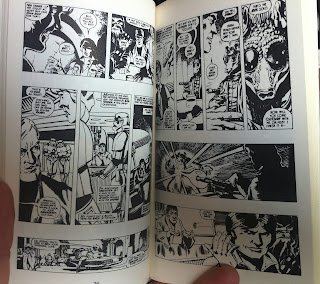 The issues are called 'chapters' and include the cover image for each issue as well as a nifty bit of closing artwork for each chapter. 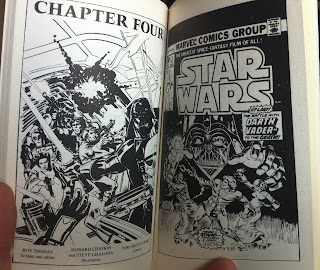 At the end of the book there's some neat pin-up art courtesy of Howard Chaykin and Ernie Chan. 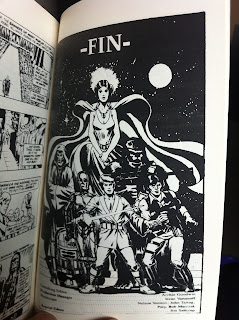 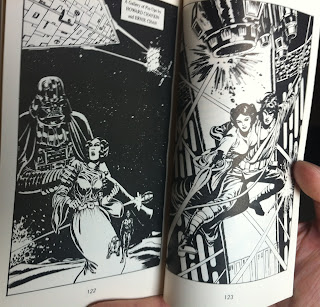 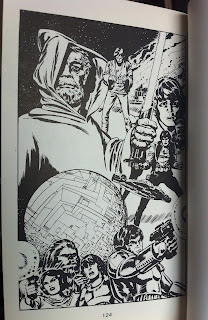 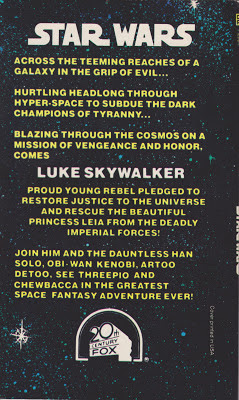