Marvel #28 - Whatever Happened to Jabba the Hut? 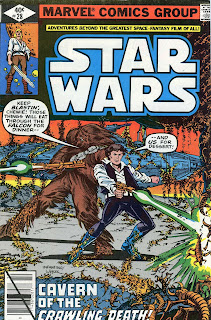 No, that's not a typo in the title, Jabba the 'Hut' was how it was spelled back then. And check out how he looks!

This was the vile gangster's physical appearance in the early days, long before it was decided that he would be the giant slug we would see in Return of the Jedi.

This issue lets us know what Han and Chewie get up to after our heroes are split up in the aftermath of the whole 'Wheel Saga'. Setting down on a rainy planet called Orleon, they hide out in a cave which appears to have a few leaks. Jabba and his cronies soon arrive, keen on killing our heroes and taking their ship. During a firefight, Han and Chewie make the frightening discovery that their cave is infested with 'stone-mites' - a species created during the Clone Wars as a form of biological warfare. These critters secrete an acid that could eat through the hull of the Falcon.

Han has the great idea of burning the creatures off with some sort of 'de-icer' force field. Eventually, they blast through the rock which is little more than a shell now after the stone mites have devoured half of it and soar away to freedom.

Encountering Jabba's space-cruiser in orbit, Han and Chewie learn that their arch enemy is in a spot of bother. One of his crew members inadvertently brought some of the infernal creatures aboard and now the irate Hut has a hole in his hull. Escaping in a spacesuit, he begs entry aboard the Falcon and receives it only after agreeing to cancel Han's debt to him.

Meanwhile in the adverts... Marvel underoos! And a few other superhero goodies. A gold Cylon commander from Battlestar Galactica and a slightly odd ad for Chiquita Banana walkie-talkies and compasses. 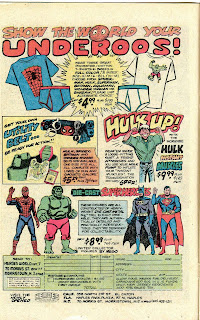 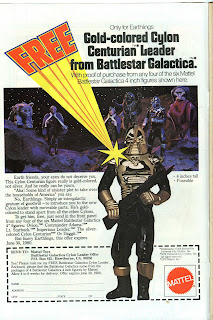 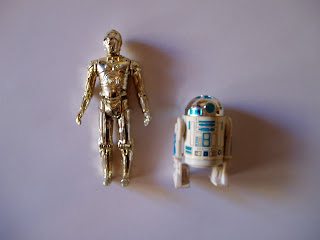 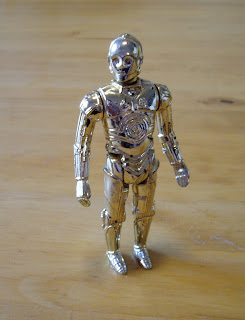 C-3Po came with no accessories and other than his dazzling gold finish, the figure might seem a bit of a poor effort. But really, what else does old Goldenrod need to do other than stand around looking pretty?

This is probably the figure that ages the worst starting right from the point of being taken out of his plastic bubble. He is made of a much more rigid plastic than the other figures and his stiff joints loosen up at an alarming rate so much so that most of the figures these days are floppy and limp as wet lettuce. The other point is his gold paint which flakes off very easily. This example looks Ok from a distance but up close he is as patchy and mottled as he is in the film. An that is unintentional of course. 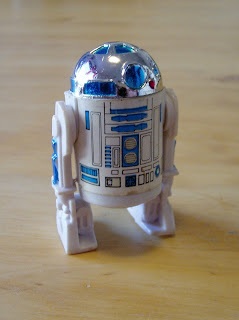 R2-D2 on the other hand rarely has problems with his joints in that he only has two of them and to be honest, they rarely get used much whatever pose you put him in. His shiny golden dome suffers much the same problem as his counterpart's golden finish and is often found faded by sunlight. The only other thing that can really age the figure is the sticker on his midsection which, after spending many years in toy boxes clattering around with other figures, is often faded, scratched and worn.
at 7:33 PM No comments: