I've touched on the infamous Star Wars Holiday Special before and, apart from a never produced line of wookiee action figures by Kenner, there was never really any merchandise for it. Apart from this. 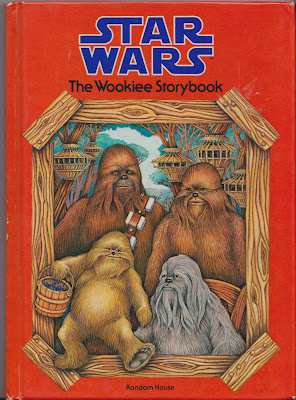 Random House did several kids books based on Star Wars including four activity books and a couple of stories - The Maverick Moon and The Rebellious Robot. This one is in a different format (hardcover) but the style is more or less the same. Tying in with what we saw of the Wookiees in the Holiday Special, Chewbacca's son Lumpy, heads down to the lower levels of the forest (against his mother's warnings) to collect wasaka-berries. Chewbacca is returning home after a three-year mission with Han Solo and there is to be a big celebration for his bicentennial. This word is mentioned quite a  lot throughout the book and the author was no doubt cashing in on the fresh memories of America's own bicentennial that was a big thing only a couple of years before this book was published. Needless to say, things don't go to plan and Lumpy finds himself lost and pursued by a series of frightening creatures on the forest floor. 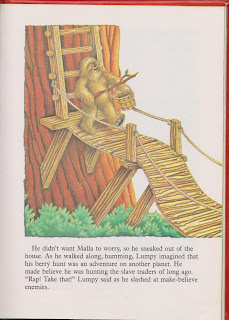 Cue Han and Chewie! Now apparently adult Wookiees have the ability to think messages to each other (at least in this obscure book). This spiritual way of communication comes in handy right about now and Lumpy's mother (Malla) thinks a message to Chewie who is on board the Falcon. Arriving at Kashyyyk, Chewie takes the Falcon's 'explorer craft' down to the surface to look for his son. Take a look at that little craft exiting the Falcon! 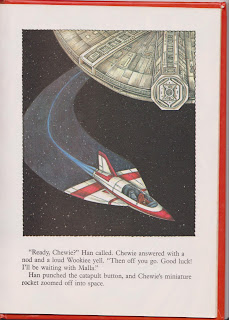 Chewie of course rescues Lumpy and they all head home for a big party. Mission accomplished. Happy days. 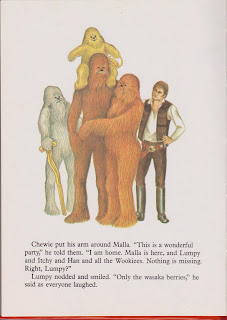