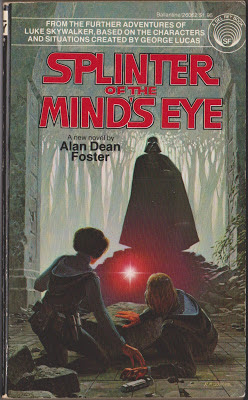 Most people know the story behind this first ever Star Wars novel (besides the novelization) published in 1978, but here's the short version anyway. Alan Dean Foster (who ghost wrote Star Wars) was under contract to write a second novel which could be filmed as a low budget sequel should the movie not perform too well at the box office. This way 20th Century Fox could knock out a cheapie 'Star Wars 2' and recoup some of their losses on the first movie. Foster's story is set entirely on  a fog-shrouded planet and contains no space battles. Also noticeably absent is Han Solo as Harrison Ford (unlike his co-stars) had not signed a 3-picture deal and would not have been likely to return for round 2 if the first film bombed. But of course Star Wars stormed the box office and Lucas was able to go ahead with his more ambitious and expensive sequel The Empire Strikes Back, relegating Splinter of the Mind's Eye to an odd existence as 'Star Wars 1.5'. Nevertheless, the book came out and became the first entry in the now gargantuan entity of 'Expanded Universe' novels that exists today.

It's fun to wonder what might have been. The book is very reminiscent of those low budget sword and sorcery flicks that were popular in the 80s; a hero and a princess gadding about a prehistoric location on some sort of quest, fending off rubbery swamp monsters and passing through shanty, underpopulated towns with some old timer handing out mystic advice. It could easily have been made into one of those kind of movies. The plot is simple; Luke and Leia (along with Artoo and Threepio) are en route to a secret meeting of rebel factions but crash land on a swampy planet called Mimban. There they discover a secret imperial mining operation and pose as miners to enter the town. Falling in with an old crone called Halla (who appears to have some minor control of the force) they learn of the Kaiburr crystal, a gemstone that magnifies the power of the force-user who wields it. They get into trouble with the local administrator, Grammel, and are thrown into a prison cell from which they promptly escape with the aid of two 'Yuzzems' (large hairy creatures not unlike Wookiees). What follows is a fairly routine planetary adventure across swamplands in a stolen imperial 'crawler', a fight with a giant worm, a descent into the subterranean caves and an encounter with the primitive race who dwell there. It is at this point that Vader shows up, also keen to get his hands on the crystal and it soon becomes a race against time to get to the forgotten jungle temple before he does.

Being an early entry in the Star Wars canon, there are the occasional, inevitable inconsistencies. The budding romance or (dare I say it?) sexual tension between Luke and Leia may make a few readers cringe today now knowing that the pair are brother and sister and is perhaps the most irrefutable piece of evidence in the age old argument that Lucas was making this stuff up as he went along. Vader's saber is described as blue at one point (no doubt due to the paleness of the blades in the original cut of the movie) but that's nothing compared to the howler Foster makes when he has Vader accuse Luke of shooting down his TIE Fighter over the Death Star. Surely somebody must had picked up on that before the book went to print?

It's an ok read and like a lot of this early stuff, it seems a bit obsolete in the shadow of what Star Wars has now become. But as with all things on this blog, it's the context of its time period that make it important. 'The Further Adventures of Luke Skywalker' must have been an irresistible tug on the young Star Wars fan in a time when there was just one movie and a handful of Marvel comic books to go on. 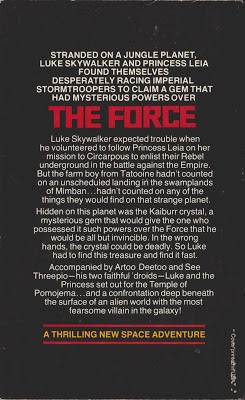 With Disney now having Star Wars spinoffs in the works, I think it would be interesting to see them make this and the other Star Wars novels like the Han Solo and Lando Calrissian stories into movies.

"...a second novel which could be filmed as a low budget sequel should the movie not perform too well at the box office."

My understanding is that Lucas figured one of two things would happen with the '77 Star Wars film:

1. It would basically break even (and thus no sequels), or

2. It would make a fair amount of money (but not a lot), thus allowing for the filming of a low-budget sequel--Splinter of the Mind's Eye.

The idea of Star Wars making a lot of money wasn't even on the radar. Lucas was shocked when it did so.

I just posted a couple of snippets to my website about star wars at http://ineverknewbutnowido.com/snippets/tag/star%20wars, but it seems like you would have a lot more to offer. Send me a message if you are interested in sharing some knowledge.